This post may contain affiliate links and discount codes. For more information, please read our disclosures.

What is your full name and title?

I graduated from Hahnemann University in 1995.

What did you do when you first finish school, and for how long?

I started as a staff physical therapist at Schwab Rehabilitation Hospital in Chicago, IL. I provided direct patient care to brain injury and amputee populations.

I enjoyed my role and the patients that I worked with; however, I was contacted after approximately six months by the employer that had been my top choice (but didn’t have an immediate opening at the time I had initially applied).

Where did you go next?

Because of this, I left Schwab after only six months and moved to Indianapolis, IN to join Rehabilitation Hospital of Indiana (RHI). I started as a staff physical therapist on the inpatient spinal cord injury team.

I loved my position—I was getting to work with the patient population I was most passionate about, I was surrounded by experienced clinicians who could mentor me, and it was a very collaborative, team-oriented environment.

How long were you at RHI?

I was with RHI for 15 years, and advanced through a series of promotions.

How did you initially transition out of patient care?

I began to get involved in non-patient care activities very quickly through our Career Ladder program, which recognized staff members for involvement in projects and activities.

After three years at RHI, I moved into a Senior Therapist role.

My Senior Therapist role was ~80% patient care and 20% management responsibilities (i.e. staffing, assisting in the hiring process, and PT-related functions such as staff meetings, in-services, and student rotations).

At what point did you make the switch to a fully non-clinical role?

Over time, the position evolved into 50% patient care and 50% management. Eventually, it evolved into full-time management as the Program Manager. The hospital experienced several re-organizations, and the role had changing responsibilities.

What did you enjoy about the frequent changes?

The changes each brought new responsibilities and opportunities for new growth and development—I was learning the operations of different disciplines such as nursing or case management, program development, coordinating with outpatient for continuum of care development. 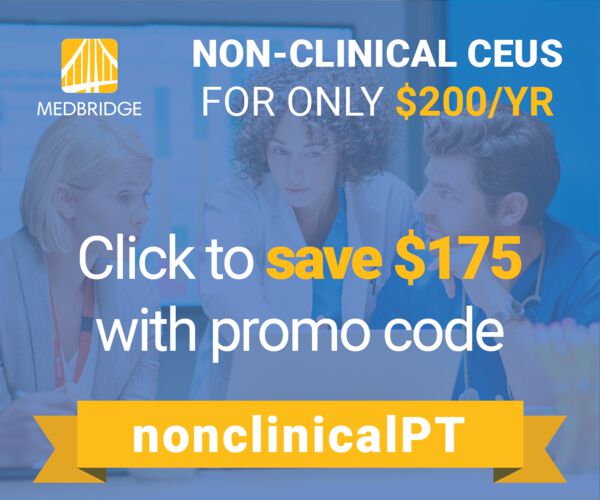 How and why did you move into a Program Director role?

I was ready for a change, but had never worked in a setting other than an inpatient rehabilitation hospital. I accepted the position of Program Director for Inpatient Rehabilitation for Franciscan Health (St. Francis at the time).

How did your responsibilities change in the new role?

I moved from a 90-bed free-standing rehabilitation hospital to a small hospital based unit, and it was my first time to work within a large acute care system.

It was exciting to learn operations of a larger system and gain experience in working with multiple departments and specialties. I had exposure to multiple hospital wide committees—each of which provided me insight into new processes.

How did you grow your career from that point?

I was once again blessed to have a direct supervisor who gave me opportunities to stretch myself beyond my primary job responsibilities. I think this is critical in growing—you have to have a willingness to go above and beyond to stretch yourself to learn new skills.

Sometimes that means you are doing the new project or task on top of all of your other responsibilities, but it is exposing you to new departments/individuals (i.e. directors, chiefs, CEOs), expanding your skill set and allowing others to see your capabilities in ways they otherwise would not have.

My next move was into the Administrative Director of Neurosciences position for Franciscan Health for central Indiana.

With this position, I had truly moved into service line leadership. I was now providing strategic and operational leadership for departments I did not have prior experience with—such as physician practice management, sleep disorders, primary stroke centers, and spine surgery.

I made mistakes along the way, but what I took pride in was a willingness to admit mistakes and learn from them, push myself, ask questions, challenge myself.

Over the years, many instructors and mentors had talked about the transferability of skills—leadership skills into new settings—but I had lacked that confidence. This position helped me understand that you can be a leader in areas that are new to you.

I learned that much of the role is supporting the members of the team and removing the obstacles to allow them to be successful in what they are doing. 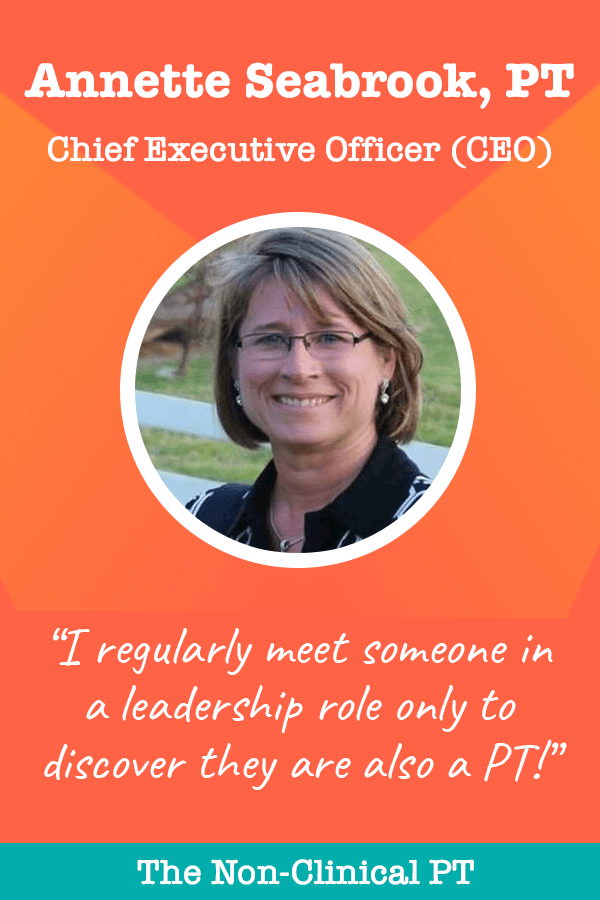 As of this year, you’re a CEO, which is incredible! Not to mention rare for a PT! How did you land this role, and why did you go for it?

I would not be in the role I am today without that experience. When the opportunity for the role of CEO of a rehabilitation hospital(Community Rehabilitation Hospital South) arose, it was an opportunity to come full circle and return to the level of care that I am passionate about.

It was an opportunity of a lifetime to be a part of something from the very beginning as a startup. I joined the company in January, and we moved into our building at the end of June. We began admitting patients in August.

I could have never imagined all that I would learn in building a leadership team and opening a new hospital. However, when you drill down—I utilized the same skills that I did moving from staff therapist to the career ladder to the senior therapist role and so on.

Did you find that having your MHA was helpful? If so or if not, why do you believe that was the case?

After years in management, I returned to school part-time in the evenings and earned a Master in Healthcare Administration from Indiana University (IUPUI) in 2010.

I do feel that getting your MBA or MHA is extremely beneficial in advancing your career. This may not be as beneficial for advancing within your organization, but as an external candidate, I think it is important in being noticed amongst the other candidates.

I am also a strong believer in being active in American College of Healthcare Executives (ACHE), and feel that achieving Fellow status (FACHE) opens additional doors. After passing the Board of Governor’s exam for FACHE, I suddenly began to be contacted more frequently by recruiters.

What are some of the traits, experiences, or qualifications that you feel have helped you along your journey?

Aside from the aforementioned training and education, the other thing that I have learned is that the traits that might help us land a leadership role—drive, competitiveness, and being a “go-getter”—are not necessarily the ones that keep us in that leadership role.

In leadership roles, it’s not always about what YOU personally can achieve; it’s more about building a team and being a part of a team that succeeds, or providing the support and guidance for others to succeed.

Did you find that your direct patient care background was an asset or a hindrance to you along the way? If so/not, why do you believe that was the case?

I find that my clinical background has been helpful along the way. At the same time, I had to learn that I didn’t HAVE to know how to do everything.

I think clinicians often feel like they need to understand the clinical procedures exactly to succeed, but I was surrounded by excellent leaders with no clinical background. They knew how to ask questions. They knew to look to clinical leaders for their expertise to guide decision making.

Do you frequently see other rehab professionals in leadership roles?

I would disagree with the commonly held notion that executive leadership roles are rare for PT. I personally know so many PTs nationally that are in corporate leadership roles, CEO roles, COO roles, service line leadership, etc.

It seems to me that I regularly meet someone in a leadership role only to discover they are also a PT.

If you could give any advice to a therapy professional who wants to go into leadership, what would it be?

My biggest advice is to understand that leadership skills are transferable to any setting. You also do not have to have a leadership title to be a leader in what you do.

Also, leadership opportunities aren’t just given to you—you need to be proactive in seeking out opportunities. Work with your direct supervisors for opportunities beyond your regular day-to-day responsibilities.

By producing quality deliverables, you will be recognized as someone capable of more, and you’ll be ready to take advantage of an opportunity when it arises. It’s also important, no matter your role, to have accountability. That means not only accountability to what you say you will do, but also holding others accountable for what they say they will do.

Thanks for your insight, Annette!